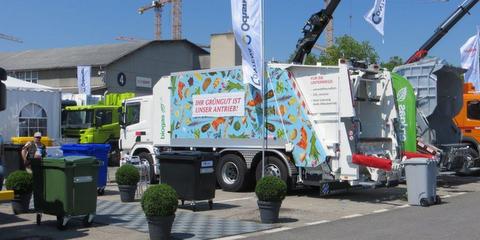 Compared to traditional lead-acid traction batteries, Lithium Ion batteries can carry about three times the energy at the same weight and dimensions. Li-Ion batteries are the only option for an E-PTO as refuse trucks and mobile cranes consume a lot of energy – and space and weight are limited. A Li-Ion cell is also outstanding in “Coulomb efficiency”. Which means that 99{599534d5acea4e918e1304b0cd6c4514edc06310f5bd1d095a6129b67a9f9384} of the energy that is fed into the battery, can be taken out again.

Battery management. A Li-Ion battery is not as forgiving as lead acid batteries. A Battery Management System is required to make sure that the single cells are equally charged and temperature limitations observed.

System costs. Li-Ion cells are more expensive than traditional batteries. These cells also need the BMS and a mechanical design that allows replacement of single Li-Ion cells. Although a cell failure is not expected during the lifetime, it may happen in real life and the system must be prepared for swift repairs.

Cell Chemistry and future developments. There are different types of Li-Ion cells and some of these are sensitive for “thermal-runaway”. Banke uses Iron-Phosphate, which delivers just a bit less capacity but on the other hand, it is very stable. Development continues and it is foreseen that in a few years from now, new stable chemistries are commercially available supplying more energy at a lower weight and smaller dimensions.

E-PTO for mobile crane. Banke delivered its first E-PTO for truck-mounted cranes. This E-PTO is a complete new design as it is located between the wheels of the truck and can be dismounted quickly with the use of a forklift. On the demonstrator vehicle, the Banke E-PTO powers a 23-ton-meter crane and a hook lift system. The system will be presented in the autumn edition of our newsletter. For more information on the E-PTO for truck-mounted cranes, read more here .

Copenhagen and Oslo go Electric. The most recent tender of Copenhagen specified all refuse collection vehicles to be equipped with E-PTOs. This means that before the end of this year, the city will be serviced with more then 100 E-PTO powered refuse collection vehicles. The city of Oslo specified that a minimum of 25{599534d5acea4e918e1304b0cd6c4514edc06310f5bd1d095a6129b67a9f9384} of the fleet must be equipped E-PTOs. For both cities, noise reduction and the reduction of emission of carbon dioxide are the major drivers for this development.

Berlin continuous testing. The Berliner Stadtreinigung (BSR) acquired a Banke E-PTO to document its performance in daily reality and over a longer period. The first round of testing lasted 6 months, and concluded that the vehicle was dependable in daily operation and delivered the fuel-savings that were expected (15{599534d5acea4e918e1304b0cd6c4514edc06310f5bd1d095a6129b67a9f9384} of all the Energy required per 100 km). The next round of testing concentrates on a higher performance tours, should precise, and confirm previous findings. Results will be disclosed after all the test are completed and evaluated end of 2015.

Delivery to the Cities of Mannheim and Bern. Zöller-Kipper GmbH supplied a Medium XLS refuse truck with Banke E-PTO to the city of Mannheim end of May. Shortly after the fair in Bern, Suisse Public, Contena Ochsner AG in Switzerland delivered their refuse truck type XL City with E-PTO and automatic lift on a Scania CNG chassis to the city of Bern.

Recent presentations:The Zöller Medium XLS demonstration vehicle with Banke E-PTO (foto) was presented at the 25th anniversary of the waste management organization of the city of Plön, Germany, end of May, and in the beginning of June, the vehicle was introduced to the representatives of the waste management association of the city of Hildesheim, Germany.
Contena Ochsner AG was present at the Suisse Public in Bern with two Banke Systems. Displayed were the official Volvo demonstrator with low-entry cabin and the vehicle ordered by the city of Bern.